A national conference was dedicated to the achievements and outputs of the Re-Turn project in Hungary. The project aims at creating framework conditions for retaining human capital and countering brain drain. 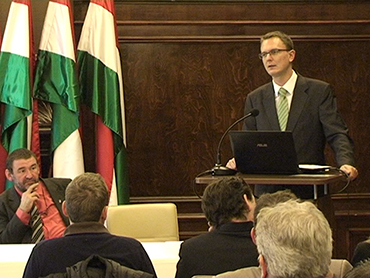 The event, called “Return Ticket conference”, was organized on 10 October 2013 in Budapest by project partners Mid-Pannon Regional Development Company and University of Szeged. The co-organizer was the Budapest-based “Gyere Haza” (“Come Home”) Foundation whose efforts in supporting returning migrants correspond to the activities of the Re-Turn project.
The event was opened by Bence Rétvári, state secretary of the Ministry of Public Administration and Justice who declared that the re-attraction of qualified young Hungarians working abroad is a strategic goal of the government and initiatives such as the Re-Turn project can play an important role in it.

Other key speakers of the conference were Ákos Szépvölgyi, representing Mid-Pannon Regional Development Company (PP07) and Gábor Lados from the University of Szeged (PP08). Mr Lados presented the main findings of the Re-Turn survey concerning Hungarian migrants and re-migrants and spoke about the policy background of dealing with returning migration. Ákos Szépvölgyi informed the participants about the local activities in the Central Transdanubia Region, with special regard to the “Re-integrate” pilot project which offers one-stop shop consultancy and telephone hotline for those who need special assistance in the re-integration phase or simply want to get more information on the local service background.